Discover what is hidden behind the detergents labels!

This blog is addressed to all of you caring people, wanting to know a bit more about your daily-used detergents.

What are they made of? Are they dangerous for the environment and/or the human health?

This blog will give you updates on our ongoing Learn-Apply-Communicate project, developed in the frame of the master program Environmental Management and Policy of the International Institute for Industrial Environmental Economics at Lund University, Sweden.

Have a look at the bottom of the page, we have added some interesting information on detergents chemical contents!

A Look into the Nitty Gritties - for one month!

Hi everyone,
During the trial account for Adobe Connect, I am able to share with you our presentation documents in full pdf format. It is free to sign up and endures 30 days before Adobe wants your money. No credit cards, Paypal whatever, you can just sign up. These documents give detail on the chemicals we found in the detergents, as well as ingredient lists, just as you see on the bottom of this blog. So if you would like to refer back to these slides long after our project is over, please come and grab them! To take a gander, get the trial version at http://www.adobe.com/products/acrobatconnectpro/trial/ and then follow the links below.
Posters
The assembled posters available to the public for comparing their local detergents.
http://meet70762960.adobeconnect.com/posters/
Product Ingredients and Prices
A list of ingredients as well as price per liter for each product chosen under all categories.
http://meet70762960.adobeconnect.com/products/
Main Chemicals
Slides that look at the main chemicals found in detergents and describe what they are used for, what health effects they have, and what happens in the environment.
http://meet70762960.adobeconnect.com/chemicals/
Other Chemicals
An analysis of the health impacts and environmental fate of chemicals besides the main surfactants.
http://meet70762960.adobeconnect.com/otherchemicals/
Posted by Lara at 10:00 AM No comments:

Posted by Johanna at 2:28 PM No comments:

Needle in a haystack? Unfortunately not ...

Lara and I have been analysing chemicals inside detergents for a while now. I have to admit that when I first started looking into the ingredients of hand soaps, laundry and dish detergents I thought it would be tough to find some evidence of toxic or environmental harmful substances. Unfortunately this was not the case. Most surprisingly for me were the dish soaps: the most used, including the well-known P&G YES (Fairy/Dreft in other countries) and ICA Skona, have several potentially toxic chemicals, especially harmful for our health. 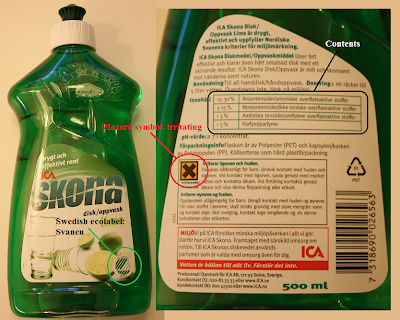 Take a look at this image. What strike you at first? The irritant hazard symbol, right? Well, believe it or not, dish soap - that you are supposed to handle with your hands to wash dishes - IS irritant (responsible chemical: Sodium Laureth Sulfate). Moreover, it is a human immune system toxicant (Cocamidopropyl betaine); can cause allergic reactions (Colourant Patent blue CI 42051) and might be carcinogenic (SLS can be contaminated with the carcinogen 1,4 dioxane and there´s a strong evidence that the colourant Acid yellow 17 - CI 18965 - induces mutations in our DNA). Needless to say, these chemicals are not explicity listed in the ingredients. One have to get the complete list from the producer´s website. This procedure is time consuming and not enough to understand the risks associated with the use of these products. Further research for each chemical is necessary. Follow our blog, and you will soon discover more about detergents. In the meantime use gloves when you wash the dishes!
Posted by Johanna at 10:04 AM No comments:

My 2 Cents on Colorants

My discomfort with regulations on colorants in the EU first struck me with an incident completely unrelated to detergents. In fact, I was delighted to be snacking on one of my favorite junk food items, wasabi peas. These are dehydrated peas that have been fried in some sort of wasabi paste mixture. I was commenting to my boyfriend on how they probably contain all kinds of chemicals that might kill me. Naturally, I started preening the ingredient information and set straight about plugging names into Google. This is when I first found out about Tartrazine in the EU.
Tartrazine (E102) can cause allergic reactions in very small number of people, with side effects ranging from hives to headaches. Asthmatics, however, are especially susceptible, and exposure can trigger severe attacks. Further, Tartrazine can play a role in stimulating hyperactive behavior in children. It is not even entirely clear which pathways link to cause these reactions.
So this shouldn't be unnecessarily added to products we consume or come in contact with, right?
Well, apparently Denmark and Sweden believed this and banned a number of suspicious additives. With the overruling of the EU, though, which has deemed these substances "safe," Denmark and Sweden must now allow their use anyway. In fact, they are all over the place: in food, fabric, cosmetics, and detergents.
I have occasionally since pondered on finding the Tartrazine in my wasabi peas, but came across it again just now while investigating the colorants in X-tra Opvask. In this case, the product contains Tartrazine and Brilliant Blue FCF (E133), the former being an allergen and the latter being an irritant. But now I also have had the pleasure of investigating their environmental fates. These colorants are in fact used to make private ponds appear pristine because of their ability to block out certain wavelengths of light that "weeds" and algae thrive on. In other words, in nature these colorants prevent a number of aquatic plants from photosynthesizing. Even worse, Tartrazine is "slightly toxic" to aquatic organisms.
I know that the EU generally prioritizes economic activity over environmental safety, but even over human health? It seems that even if the evidence is ambiguous that the precautionary principle would be wise for something as optional as colorants. I mean, these detergents have huge lists of chemicals to research; but to be fair, most of them serve a functional purpose, be it cleansing, stabilizing, or even conditioning. But colorants are just an unreasonable danger to people and the environment. Get on board, EU!
Posted by Lara at 5:07 AM No comments:

It's been wonderful finding that none of the nine selected Danish detergents contain phosphates. Rather, there has been a combination of substitutes such as phosphonates and enzymes that effectively soften water and chelate metals. During my research, however, I've found that the state-mediated regulations in the U.S. on phosphates in detergents is rather recent (varying by state, but within the past few years); and worse it has met resistance.
Just for a touch of background, phosphates degrade into phosphorous in the environment, which -- due to large-scale use in household detergents -- finds environmental pathways to bodies of water. Since phosphorous is a limiting nutrient to plant growth, the newfound abundance has spurred widespread algal and plankton blooms. This leads to a phenomenon called "eutrophication," and can severely damage aquatic ecosystems. The problem became just big enough, just loud enough, and just enough in people's own backyards that there has finally been some action.
However, one must be thoroughly outraged at the glaringly stubborn spots upon once sparkling wine glasses, fresh out of the dishwasher! There was a NPR article last winter (Elizabeth Shogren "Dishes still dirty? Blame phosphate-free detergent." 15 Dec 2010. National Public Radio. Accessed 21 May 2011: http://www.npr.org/2010/12/15/132072122/it-s-not-your-fault-your-dishes-are-still-dirty), in which it's clear that the reason for the removal of phosphates is sometimes neither believed nor accepted. Sue Wright from Austin, Texas, does not believe that phosphates are growing algae. But why? Based on what? Surely one can't believe that the government would make these regulations AND detergent corporations would comply if there were not solid foundation.
This goes to show that despite the ease of access to information (whether scientific or social) and the gradual adjustment with alternatives is not enough to comfort the impact on people's standards of living. According to the article, Sandra Young just adds her own phosphate to her dish detergent now, completely circumventing the purpose of removal in the first place. But I wonder, will she really keep buying the extra phosphate? Will she teach this to her children and will they do the same? Perhaps the change over time will be more easily accepted. Maybe we can all put in a little more effort and hand wash. Or maybe we can live with the spots.
Either way, it's clearly painful mourning phosphates in the U.S.
Posted by Lara at 8:31 AM No comments:

Email ThisBlogThis!Share to TwitterShare to FacebookShare to Pinterest
Older Posts Home
Subscribe to: Posts (Atom)
In this column you can find some useful definitions !

What is a detergent?

A detergent is a compound, or a mixture of compounds, intended to assist cleaning. It may include:

What is a surfactant?

Surfactants are compounds that lower the surface tension of a liquid, the interfacial tension between two liquids, or that between a liquid and a solid. Surfactants may act as detergents, wetting agents, emulsifiers, foaming agents, and dispersants.

What is a builder?

Builders improve the quality of the water, hence letting the detergents work in a more efficient way. They soften water by binding free water hardness ions (magnesium, calcium). This prevents those particles to react with other detergent ingredients, which would cause them to work less efficiently or precipitate from solution (soap scum).